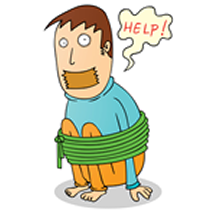 I often marvel at the way a gifted hostage negotiator can diffuse a crisis and bring it to a close, even when circumstances have reached the extreme. The techniques these negotiators use can be really helpful to us too, especially when an emotional upset sends us into orbit.

Most of the time—when we’re that upset—it is as if our awareness has been taken hostage. Who is the culprit? Our Stone Age brain.

Your brain evolved in a landscape full of threats to your physical safety, so evolution kindly gave your brain very reliable mechanisms for getting you out of harm’s way. Your Stone Age brain does this by shutting down anything that would cause you to stop and consider what you are doing. This works really well when you are evading hungry lions on the ancient savannah. It’s completely counterproductive when the threat is emotional.

When you are emotionally triggered, your brain can’t distinguish between a threat to your physical survival and an emotional upset. It responds to both in precisely the same way, as a matter of life or death. This triggers the fight-or-flight response. Your brain in full blown fight-or-flight believes that fleeing or fighting (some psychologists would add “freezing” to that list) are its only options.

When your negative emotions surge, you do have recourse. That recourse is to enter into a negotiation with the freaked out part of your brain by consciously activating the part of your brain that can evaluate what is happening to you.

The first step in any hostage negotiation is to try and establish communication with the hostage-taker. When it’s the primitive part of your brain you’re talking to, this communication is established by slowing down, listening to your mind’s uproar, and observing your body’s stress response.

You see, the part of your brain that can rationally assess the situation and consider what is in your long term best interest has the power to shut down your fight-or-flight response. Just the simple act of noticing you are in fight-or-flight has a very real physiological effect that actually starts to calm you down.

The next thing a good negotiator does is to establish rapport through compassion. Self-compassion has an incredibly powerful influence on the psyche by allowing your brain an opportunity to feel emotionally safe. Once your higher awareness has established rapport with your upset primitive brain, then your self-negotiation can enter the fourth phase, which is to introduce options other than fighting, fleeing or freezing.

When the mind launches into fear or outrage, its projection of a disastrous outcome is invariably overblown. When a negotiation enters the options phase, a hostage negotiator knows exactly how to frame the distinction between what is unattainable, possible but highly unlikely, or probable if the hostage taker doesn’t shift his demands. This allows the hostage-taker to enter a more rational state and begin to see that his original goal is not in his best interest.

If the negotiator has the time to get through all of the phases, the negotiation eventually shifts to emotional equilibrium and  the hostage-taker, more objective now, is able to surrender peacefully.

When you’re negotiating with your survival brain, remember that a successful negotiation takes time and patience. Quite honestly, most of our upsets can pass quietly if we take time to process our emotions and succeed in restraining our out-of-power words and actions until we achieve calm. So, next time you find yourself in emotional orbit, stop and observe what is happening, and then take a page from the hostage negotiator’s handbook.