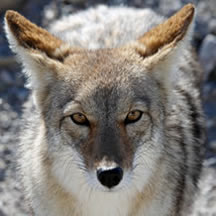 It’s been quite a while since my last post. I had intended to keep up a rhythm with posting, but the past few weeks have been incredibly busy ones, and before I knew it, the month had evaporated.

I’ve been working on From Solo to Soulmate, a program I’m launching soon, and wrapping up my book on the subject has been all-consuming.

The amount of work needed to get a project like this one up and running is always surprising, and like all of our labors to build something new, there are no guarantees that it will be successful. For some reason, I haven’t fretted much about failing this time. I guess you could say I’ve grown up a bit during the maelstrom of the last couple of years.

Last night, my husband spotted a coyote very close to our cabin, and we were able to watch him for quite a while as he explored the field behind us. Such encounters are rare here, although we do hear coyotes at night from time to time, especially in summer.

At one point, the coyote stopped and looked me right in the eye for almost half a minute. It was startling enough that I asked one of my guides, Spotted Eagle, about it.

He told me that Coyote represents both the creator and the jokester.

He said the thing to keep in mind about Coyote “medicine” is that it often fails to produce the result we expected. However, in failing, it always serves a much greater purpose. Coyote offers wisdom that is hidden from us, unless we fully accept what didn’t work out the way we expected. Only through acceptance are we granted access to the wisdom available from the apparent failure. He said the keys to coyote medicine are adaptability, simplicity and trust. It is Coyote who reminds us that wisdom and failure are inextricably linked in the sacred paradox that is our fulfillment.

This encounter and the teaching that followed it gave me pause to reconsider how I view all of the so-called failures that punctuate my past.

I was reminded of something Spotted Eagle loves to say: that a good education is expensive, and failure is usually the engine that drives our evolution in the direction of our eventual success.

It’s only human to resist the pain of failure. Perhaps Coyote can teach us to resist a little less so we can mine the wisdom present in all of the many things that did not turn out the way we expected or wanted.