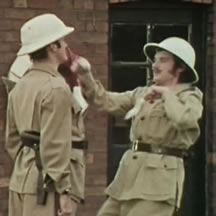 How we deal with life can look a lot like that hilarious old Monty Python sketch called, the “Fish Slapping Dance.” We can spend a lifetime dancing around our fears and issues, only playing at confronting them. Then every now and then, life pulls out a big uncertainty and gives us a good wallop.

Yes, we need to have a sense of humor about it! But more than that, in undergoing life’s surprises—when our assumptions about the future are challenged—there is so much to be gained by what we learn during the crisis.

Rahm Emanuel, Mayor of Chicago and President Obama’s former Chief of Staff, said something pretty interesting back in November of 2008. He said we should never let a crisis go to waste, that during a crisis, we are often more willing to do things we would never consider when things are going great.

This is a bit of a two-edged sword, I admit. Frightened people are usually the most likely to do something reactive and, frankly, stupid. On the other hand, a crisis can create an opening for necessary changes that can happily be put off when everything is going smoothly. Let’s face it: the so-called “good times” can make us complacent.

Like in the “Fish Slapping Dance,” we all have the luxury of dancing around big problems for a while, but it’s often not until they knock us silly that we are willing to admit that a transformation is required of us.