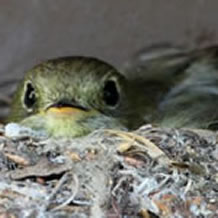 Our cabin on this mountain is rather small, so it’s our shed which houses the washer, dryer and the chest freezer. Normally, I keep the shed window shut against all manner of local rodents, but during the last heat wave, one night when a cool breeze finally came through, it seemed best to risk an incursion by mice, wood rats and voles to cool the place down.

Honestly, this window isn’t something I relish touching. It’s opaque with many seasons of unwashed grime, and there are quite a lot of cobwebs around the latch. (It’s apparently a nifty place to anchor a spider’s web.) So, when I open this window, I pay strict attention. I can’t help but inspect the area before I tackle the task of undoing the latch and scrapping the pane against the detritus that has collected in the channel in which the window is supposed to glide.

So, you can imagine my surprise when I reentered the shed at dawn the following morning, only to find that a tiny fly-catcher bird had apparently spent the night building a very exquisite little nest from bits of moss, leaves, weed straws, and shreds from a long discarded lizard skin.

And just then we startled each other, the would-be mother and I. She was about to fly into the open window, and she let out a shrill chirp when she saw me sanding there, hovering over her nest. Of course, I left the shed immediately, then watched and waited at my bedroom window, hoping she would come back and reclaim her nest, but she didn’t return.

Even so, I didn’t have the heart to close the window. The nest is, well…nestled so cozily on the sill against the casing. This little exquisiteness of the mother bird’s “mistake” was now my daily pleasure, and no less a masterpiece for having been built in the wrong place at the wrong time.

Then one morning, when I entered the shed, she was on the nest, flying out of the open window the moment I appeared. And there they were, four tiny speckled brown eggs!

My first reaction was to chart an absurdly impractical plan to never enter the shed again until her babies were fledged and out of the nest. My husband, a country boy born and bred, shook his head and said firmly, “You’re talking 14 weeks! No, she chose the spot. Now she’ll have to share the shed with us.”

It wasn’t lost on me that my first reaction was to sabotage my own peace to spare the bird discomfort. (Hmm…that sounded pretty familiar…) Frankly, it never occurred to me that she and I could work out some sort of mutual accommodation. She was a creature of Nature, and I, a blundering human, was trashing her plans for a family! (My husband will roll his eyes when he reads this.)

The bird and I have been at this for about a week now, and she is managing quite well with the daily incursions of humans. She doesn’t leave when we come into the shed, unless we need to get right next to the nest. And if she leaves, she’s back within seconds of our departure.

We’re actually coexisting pretty well, I’d say. (Okay, I admit I haven’t yet tested the robustness our détente with a rumbling load of clothes on the spin cycle yet.) And I’ve even been rethinking my original opinion that the nest was built in the wrong place at the wrong time.

Frankly, I needed this. It’s an excellent lesson that will forever inform the way I deal with conflict, especially when I am tempted to assume that it can’t be worked out or that the other can’t do what it would take.

And it’s also just so heartwarming to think that if she is as successful as she is determined, I will likely have a bird’s eye view, from the bedroom window, into the care and feeding of the hatchlings, which would be such an enormous privilege.

Hear me sigh with delight. 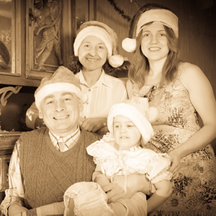 With Thanksgiving just past, Hanukkah in progress and Christmas right around the corner, chances are good that family issues may be disturbing your peace.

One question that gets put to me pretty frequently during holiday season is this: “I want more than anything to change our family dynamic, but no matter what I try it never works. What am I doing wrong?”

Let’s face it. Someone you’ve known most of your life, who also played a role in your early childhood conditioning, is bound to have a “special effect” on your psyche. The patterns you’ve established with your earliest relationships have the longest standing patterns, a high degree of emotional charge and are often the most resistant to your efforts to change them.

Does this mean that trying to shift the dynamic is an exercise in futility? No, but you need to be realistic about what can be achieved.

Family dynamics tap into powerful unconscious forces. This means your efforts to shift the energy of the dynamic may not be appreciated by others involved. When you alter your behavior, you might come under pressure by other parties in the dynamic to maintain your old role and thereby remain in everyone’s “comfort zone.”

Also, keep in mind that family dynamics have a peculiar ability to tap into our Stone Age brain’s fight-or-flight response. When this happens, avoiding the conflict or fighting about whatever it is may seem to be your only two choices. The truth is there are a multitude of other alternatives that are probably not obvious to you when you’re acting out your old role.

The point is you can’t change the dynamic unless and until you change your own role in it. That said, if you’re determined to change, you’d be wise to keep it simple. Set your intention to change just one thing you feel you could do consistently, even under pressure.